The Photography of Charles Belden 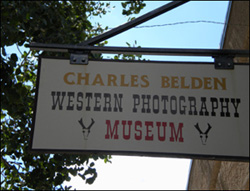 The Belden Museum features the photographic works of Charles Belden, many of which document daily life on the Pitchfork Ranch from about 1914 to the 1940s. The Belden Museum also exhibits the personal memorabilia of the photographer and his family. The exhibit “Little Wahb, the Grizzly Bear,” and the Olive Fell Gallery are also located here.

A Biography of Charles Belden

Charles J. Belden was born in San Francisco, California, on November 26, 1887. Charles was raised in California and was influenced at an early age by his uncle, who was a very good photographer. After finishing high school in Ross, California, he enrolled at the Massachusetts Institute of Technology in Boston. He graduated in 1910, but not until he had become friends with Eugene Phelps, who would later become his brother-in-law.

The greatest contribution of Charles Belden to the Pitchfork Ranch was making it famous. In the 1920s, ‘30s, and ‘40s, Belden took pictures of the Pitchfork Ranch for newspapers in Los Angeles, Denver, Billings, Minneapolis, Detroit, Cleveland, New York, and for National Geographic magazine.

Belden’s abilities with the older type cameras were never surpassed. He captured scenes that have never been captured, even with modern equipment. Belden had a great advantage over the photographers of today. He lived with his subject matter and thoroughly understood every detail of it. He was a master of composition, light, and angles and this showed in each of his photographs. His technical abilities, combined with an unequaled knowledge of the cowboy and sheepman, allowed Belden to capture the true life and times of the Pitchfork Ranch from 1914 to 1940. He once said, “If a picture does not tell a story, it is not worth taking."

He lived and worked on the Pitchfork and, in 1922, became a co-manager with Eugene, but neither was very good at it. Charles decided to leave the ranch about 1940. At the time of his departure, the ranch was having financial problems, the family was in disagreement over almost anything, and the burden grew too great on him to tolerate. On February 1, 1966, Charles Belden died of a self-inflicted gunshot wound in St. Petersburg, Florida, a sad ending to a great American cowboy photographer.